A week in the life at Key Club LeadCon 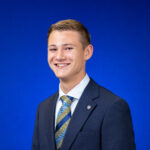 My first solo trip. LeadCon. Six days of Key Club and meeting everyone I will spend the next year working with. The confidence was there, but the airlines post-pandemic were not.

I flew two hours from South Dakota to Indianapolis. Of course, considering I live in a town of 1,800 people, every city looks like a metropolis. Laura Holloway whipped us up into the van and drove us to our office for the week. One by one, each trustee arrived, and each time, my only thought was to not say something dumb. I was coming from the least populated location of anyone. I did not want to admit that I had no idea what Shein was (it’s an online store, if you didn’t know either) or that I couldn’t tell you how an AP class functions.

Luckily for me, my exotic farming background helped break the ice. Eventually, the entire I-board was bonding more than I could have ever imagined. We stopped at Hibachi (my first time), and it turns out, they throw food into your mouth! I am proud to say I caught mine on my first try. We then hit up some duckpin bowling near downtown Indy, which led to another excursion later in the week. (Stay tuned.) I should have never been worried.

Two days passed, and it was the night before our governors arrived. It also happened to be “sistrict” reveal night, which is when trustees learn their assigned districts. We were anxious. President Lilian decided she would create the most suspenseful night of our lives by delaying the reveals to later in the night. Thankfully, the clock hit 9 p.m. and the reveals began. Each trustee stepped forward to find their designated reveal balloon. We then had to pop our balloons and read off our districts.

I went second. I popped the balloon to read (in this order): Illinois-Eastern Iowa, Texas-Oklahoma and Kansas. One of the most memorable and intense moments of my life. Soon, every trustee had little blue shards of paper and was calling, texting and face-timing every person they could find in their contacts. It was chaos — but that good, Key Club chaos.

A night of timer-photos later, and the governors had arrived. Once again, I was nervous. I wanted to make the best first impression ever. Should I bring up my addiction to “Star Wars?” Or do I discuss Policy F in the Key Club bylaws? I honestly couldn’t tell, but once again I had overthought everything. These governors were so easy-going. You could strike up a conversation on nearly any topic. Our day consisted of introductions, meetings, TikToks and my favorite, DEI (a.k.a., Diversity, Equity and Inclusion). A highlight of LeadCon was watching Vice President Layla get chucked into the pool after losing at duckpin bowling. (Better luck next time!)

The weekend was now over, and it was time for everyone to return home and apply what they learned in Indianapolis to their home, school and community. Well, nearly everyone.

Our bus left the hotel at 3:30 a.m. I knew something was up after my gate had changed four times in a row. However, all seemed well; I hopped on my plane to Chicago, and right when it landed, I got that one notification you do not want to see: “canceled flight.” If I am being honest, I laughed very hard in public: I had been saying I wasn’t ready to go home yet. I waited in Chicago for 12 hours, got a plane seat when someone didn’t show up and was in South Dakota at midnight.

In the end, I never did need to worry. I will be working with some awesome people this year, and I am blessed with the best sistrict ever (shoutout to Texillansas). It doesn’t matter where you’re from, how old you are or what resources you have — you can do anything.

Don’t be afraid to go for something you want. Before you know it, that opportunity will have passed. Do you want to experience LeadCon? Go for it! Run for governor! Run for International! You can do it. You will do it.